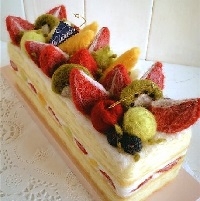 My father was a science teacher and artist, and my mother was a social worker and Japanese dancer.

I abandoned the career paths of Japanese language teacher and koto player to raise two sons.

When I was raising my children in 2003, I was introduced to the needle-felt method and was drawn to the texture of wool, the simplicity of the method, the excitement and emotion of felt-making. Thereafter I started to teach myself the method and work to create my wool and felt pieces.

By combining my interest in architecture with a knowledge of pastries and ability to portray the picturesque, I made an original genre of wool sweets.

I specialize in creating artworks both realistic and cute and have published six books from 2012 to the present.

Always flexible and daring, never hesitating to directly express what I like.

Besides training for the future and searching for new fields of expression, I presented works in Paris, the city of art.

2003. Introduced to needle-felt method. Then, after being given just one needle, I started teaching myself the craft.

2004. Started to present my works online and sell them independently to interested buyers. Started to reply to inquiries from those wanting to make their own works.

2005. When my children were enrolled in kindergarten, I was directly struck by this voice telling me what I wanted to become, and I became president of the “anemone wool sweets” classroom.