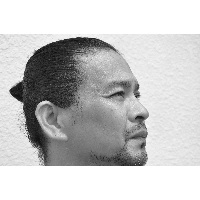 Trusting in himself and his brush, became independent in 2003.

Sharing the same luck and fate as famed ronin Miyamoto Musashi, Aun eventually began calling himself the wandering calligrapher Zenryu. He at once noticed that the natural world of Ishigaki was truly his childhood friend, and also his master. It’s rthym, it’s balance, his inspiration…

His one-man exhibitions, events and salon activity does not just stay in Japan however, and his work in Florence was greatly admired.

Several works of his including: 「Manet’s Tiger」, 「Othello On My Mind」, 「King of Cooking」, 「next」,   「Okinawa in the fence」 and 「Okinawa is in love with Taro Okamoto｣ have been acquired by a television title, a signboard store, hotel interiors and a number of media organisations and magazines.

When the Emperor and her Majesty the Empress visited in Okinawa in 2004, he met them after he was requested to make a calligraphy for the rest room where the royal visit decanted.

Additionally, he exhibited at the 35th International Calligraphy Exhibition for the first time, where his work was chosen for its quality.

Aun will be displaying a mixed interior and calligraphy piece「WA-terior」in Taiwan.